We’re excited to announce that Aquna Sustainable Murray Cod (Aquna) has been recognised for our commitment to sustainability, winning the Excellence in Sustainability Award – one of 14 categories at the NSW Business Chamber Murray-Riverina Awards.

Announced at a gala event in Temora, the award win is a tribute to the whole Aquna team who are dedicated to setting the environmental sustainability benchmark globally for the aquaculture industry.

For Director Roger Commins, it was an honour to accept the award.

“At Aquna, we want to have a positive impact on people’s plates and the planet,” Mr Commins said. “We are very proud to be recognised for such a prestigious award amongst a pool of incredible and diverse finalists.”

Aquna Managing Director Mat Ryan said that since listing on the stock exchange in January 2017, the entire Aquna team have set their sights on finding a better way to deliver food security through sustainable aquaculture.

“In a relatively short period of time, we have managed to implement world-leading sustainable practices across our entire business,” he said.

Aquna will now proceed to the NSW finals, which will be announced at a Gala Dinner on Friday 22 November at ICC Sydney. How do we farm fish sustainably at Aquna Murray Cod?

Understandably, more of us want to know where our seafood comes from, and whether it’s been produced responsibly. Here’s what we’re doing. Aquna Sustainable Murray Cod has been selected as a State Winner at this year’s delicious. Harvey Norman Produce Awards. Why Murray cod is a healthy fish to eat this Easter

What are your plans for the Easter 2021 long weekend? If you’re hosting a feast with family and friends, why not wow them with healthy Murray cod? We’ve released 10 legal-size, tagged Murray cod into the Murrumbidgee River between Wagga Wagga and Hay – with $30,000 in cash prizes up for grabs! Add a taste of Peru to your summer home cooking, with Heston’s Aquna ceviche Aquna Murray Cod Rillette is similar to a confit and partners perfectly with a lightly toasted sourdough. Aquna Sustainable Murray Cod announces that Heston Blumenthal and the Fat Duck Group have developed a series of 10 Aquna recipes. 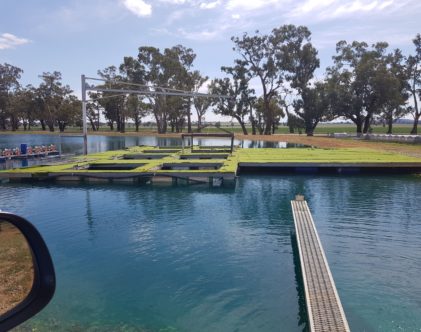 The wait is over Aquna take out NSW Business of the Year title

Aquna Sustainable Murray Cod have taken out the top prize at the NSW Business Chamber annual awards, being named NSW business of the Year. Aquna retail is open for business Aquna debuts in the US Our sustainability story, so far

At Aquna Sustainable Murray Cod, a commitment to sustainability is embedded in our corporate identity, business practices and culture. We want to have a positive impact on people’s plates and the planet. The appointment of worlding-leading chef, Heston Blumenthal, as a shareholder and key advocate at Aquna Sustainable Murray Cod created quite a stir last week. The story, which made international headlines, has sparked a surge of new interest in our luxury product. From pond to plate: Up close and personal

Our pond to plate video is a tale of how innovation, technology and hard work has combined to create Aquna Sustainable Murray Cod, a fine-dining fish sought-after by chefs in restaurants throughout Australia and around the world. The changing face of aquaculture With reports of more than a million fish dying along a 40-kilometre stretch of the Darling River in far north west New South Wales, Aquna Sustainable Murray Cod has joined forces with the community to try and prevent further deaths. Aquna Sustainable Murray Cod (Aquna) is set to release more than 200,000 native fingerlings into the Murray-Darling Basin in January 2019. For hatchery manager, Ian Charles, Aquna’s restocking program represents the core of who we are as a business. Farmed Murray cod has been listed as a ‘better choice’ in the updated Sustainable Seafood Guide – marking a significant win for Aqua Sustainable Murray Cod. Our innovative farming system has improved on what nature has provided us. We have created a luxury aquaculture product that has improved the flavour of our Murray cod. A healthy appetite for Murray cod

A low-energy source of protein (26g protein in one 150g serve), Aquna Sustainable Murray Cod is a versatile white-fleshed fish best known for being a good source of omega-3 fatty acids. “Aquna Sustainable Murray Cod is interesting to me because it has a cool balance between being nice and fleshy, and delicate and moist,” – Luke Piccolo, award-winning chef, Limone Dining. Launched in July 2018, Aquna Sustainable Murray Cod is the new brand identity for Murray Cod Australia (MCA). It is an exciting evolution that better positions the thriving aquaculture business as the producer of premium Murray cod. Award-winning chef and restauranteur, Luke Piccolo, shares our connection with the Riverina. We’re thrilled to have him on board as our ambassador. A Griffith local with Italian heritage, Luke grew up surrounded by food and culture. A delicious protein alternative, Murray cod is a great addition to your family meal repertoire. Mild in taste and firm in texture, cod is versatile and easy to cook. Plus, it’s packed with a wonderful and wide range of vitamins and minerals.